In this project I used a wave file with sample rate of 16000 Hz and 2 channels (stereo). The file I used originally it was an MP3 file and I converted it to 8-bit wav format using an audio converter named audacity, it is a free and open source audio software (site: http://www.audacityteam.org/). 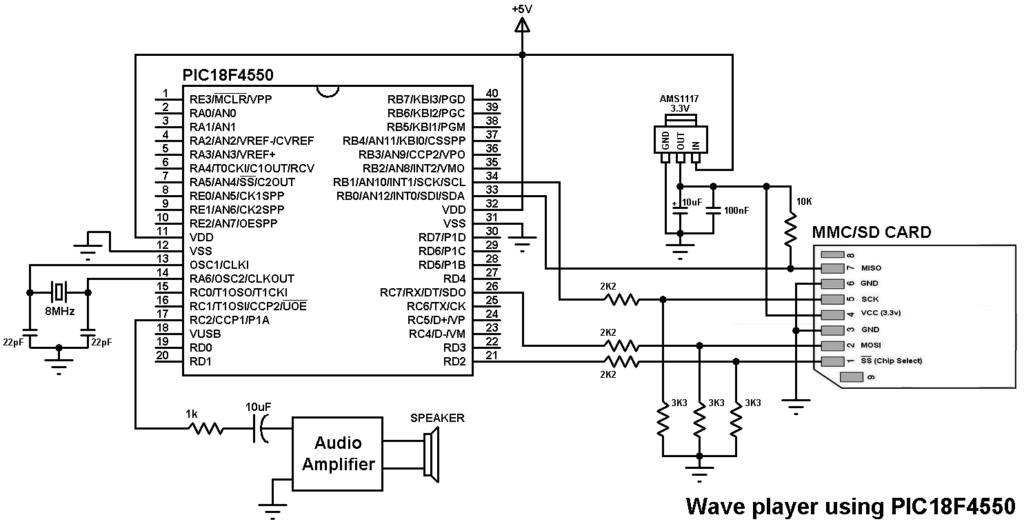 Hardware SPI module is used by the microcontroller to read data from the SD card, the SPI pins of the PIC18F4550 MCU are:

There is an other pin which is CS (Chip Select or slave select) can be connected to any digital output pin (defined in the code), this pin is connected to SS pin of the SD cards.

The audio is generated using PWM technique, basically the PIC18F4550 has two PWM modules and their output are RC2 and RC1 for PWM1 and PWM2 respectively. An audio amplifier is needed to amplify the audio. In my circuit I used PC speaker as an amplifier. If the audio is stereo (2 channels) connect the same amplification circuit and use PWM2 output pin (RC1).
In this project PIC18F4550 MCU runs with 8 MHz crystal oscillator and MCLR pin function is disabled.

The C code:
The C code below was tested with CCS C compiler versions 5.051 and 5.070.
The microcontroller runs at 48MHz (8MHz + PLL).
In this project I used the FAT library (FAT16 and FAT32), its source file can be found in the the following topic:
SD card FAT library for CCS C compiler

I tested this project with FAT32 8 GB and FAT16 2 GB micro-SD cards.
The name of the wave audio file which I used was audio (audio.wav with the extension), its sample rate is 16000 Hz with 2 channels (stereo).
First of all I initialized the SD card using the function: sdcard_init(); this function return 0 if the initialization was OK and non-zero if there was an error. After the initialization of the SD card I initialized the FAT file system using the function fat_init(); and then I opened the wave audio file with the pre-selected name audio.wav, all the three previous function returns 0 if OK and no-zero if error.
If the initialization of the SD card, the FAT system and opening of the file were OK that means the variable which named ok = 0 and playing the wave file starts using the function play(); .
The wave file header size is 44 bytes which I skipped using the variable file_pointer. The variable file_pointer belongs to the FAT library, this variable can be between 0 and the opened file size, for example if a file of size 500 byte is opened the variable file_pointer starts from 0 and ends to 500, it is incremented with the function fat_read_file according to the selected size. Generally it can be neglected in this project and the line below can be removed from the code:
file_pointer += 44;