PIC18F4550 has one CCP module and one ECCP (Enhanced CCP) module, the CCP module which CCP2 can generate a PWM signal on pin RC1, and ECCP which is CCP1 has an enhanced PWM capabilities, but this ECCP can work as a simple CCP. In this topic we are going to see how to use CCP1 (not enhanced CCP) and CCP2 to generate PWM signals on RC2 and RC1 respectively.

For example forPR2 = 250 , microcontroller frequency = 8MHz and Prescale = 16 we get a PWM frequency of 500Hz.
The CCS Timer2 configuration has the following form:
setup_timer_2(mode,  period, postscale);
where: mode is TMR2 Prescale Value, period is PR2 and postscaler is not used in the determination of the PWM frequency (keep it 1).
Previous example gives the following Timer2 configuration command:
setup_timer_2(T2_DIV_BY_16, 250, 1);
The last CCS command is the PWM duty cycle command:
set_pwm1_duty(value);

PIC18F4550 PWM +ADC example:
This example shows how to use the digital value of the analog reading to set the duty cycle of the PWM signal. This example uses two analog channels AN0 and AN1 and the two CCP modules CCP1 and CCP2 to control the brightness of two LEDs connected to RC2 (CCP1 output) and RC1 (CCP2 output) as shown in the following circuit schematic: 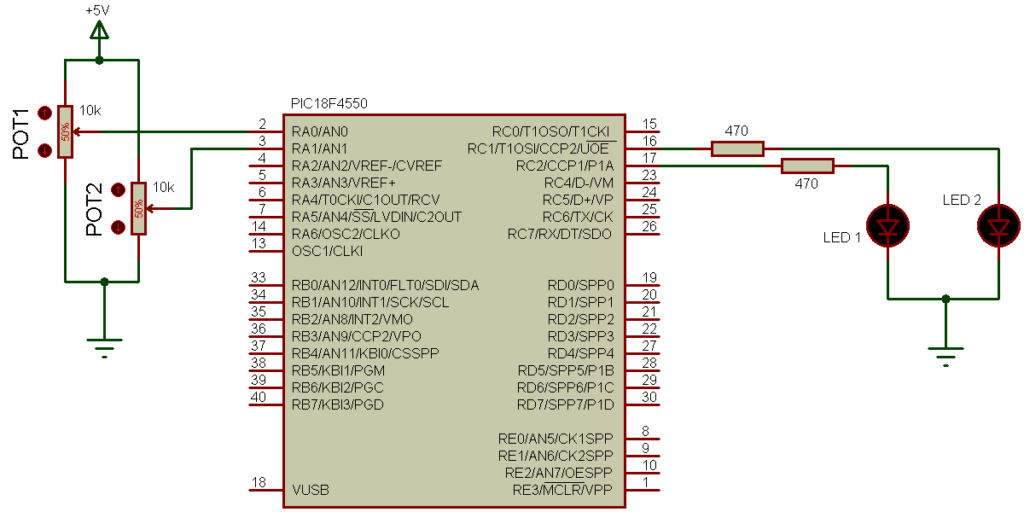 Two pots are used to control the brightness of the LEDs. The microcontroller PIC18F4550 runs with its internal oscillator at 8MHz. If the frequency of the oscillator changed, the PWM frequency will also change.
To see how to use PIC18F4550 ADC module see the following topic:
PIC18F4550 ADC example with CCS PIC C compiler