As a project of SD cards and CCS C compiler, this topic shows how to use the CCS C MMC/SD card driver and FAT library (not the original ones) with PIC18F4550 microcontroller in order to read and write files and folders from and to SD card formatted with FAT32 file system.

This topic shows 2 circuit schematics that tested in hardware, also Proteus simulation is provided with small testing video.
This project shows how to create folders and files, and how to write to text file and read from it again.

Hardware Required:
This is a list of the basic components required for this project (all components are shown in the circuit diagrams)

To connect the microcontroller with the laptop (PC) we need (one of the following):
—> USB to serial UART converter such as FTDI232RL module, or
—> an Arduino UNO board (connect reset pin to GND, Arduino GND to PIC GND, TX to TX and RX to RX), here the PIC18F4550 can be supplied from the Arduino board, or
—> USB-to-RS232 converter (if the PC doesn’t have a RS232 com port), MAX232 chip, RS232 female connector and four 10 uF capacitors.

The easiest way is to use the FTDI232RL module, using Arduino UNO is also easy.

Interfacing PIC18F4550 with SD card circuit:
The circuit schematic diagrams below can be used for this project. But it is recommended to add a voltage level translator to MISO line in order to step up the 3.3V which comes from the SD card into 5V which goes to SDI pin (#33) of the PIC18F4550 microcontroller, here we can use the integrated circuit 74HCT125.

In the first circuit I used micro SD card module, this module is supplied with 5V, it contains the AMS1117-3V3 voltage regulator which is used to supply the SD card with 3.3V. Also this module contains an IC which is 74LVC125A and it is used as level translator (from 5V to 3.3V). 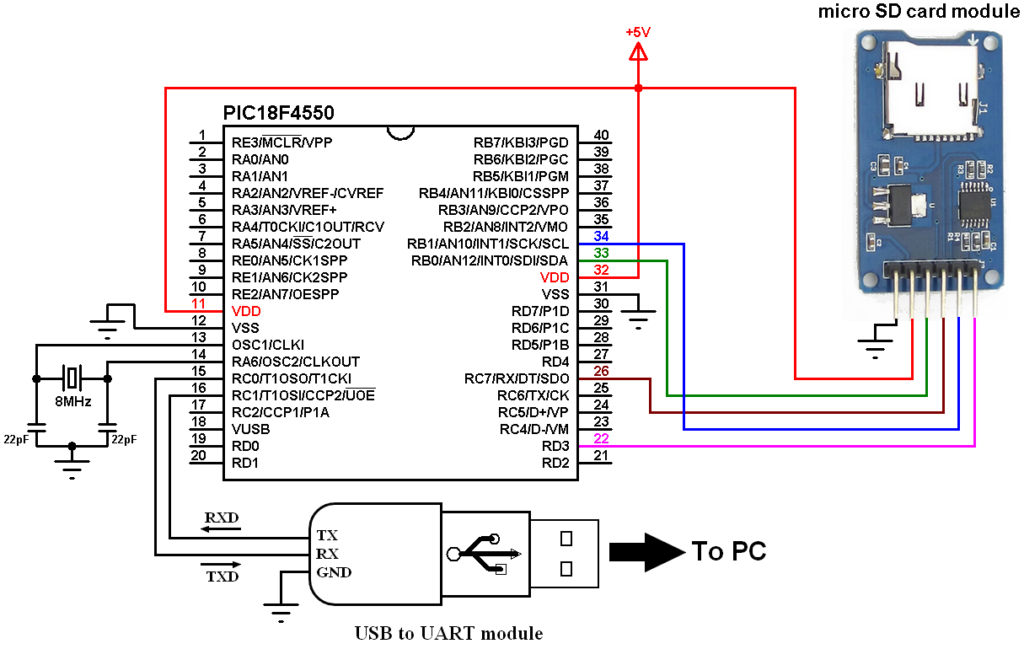 The 2nd working circuit is shown below. In this circuit I used 3 voltage divider for SS (RD3), MOSI (RC7) and SCK (RB1) lines. Each voltage divider consists of two resistors (2.2k and 3.3k), the voltage divider here steps down the 5V into 3V which is enough for SD card data lines. the MISO is connected directly from the MCU to the SD card. 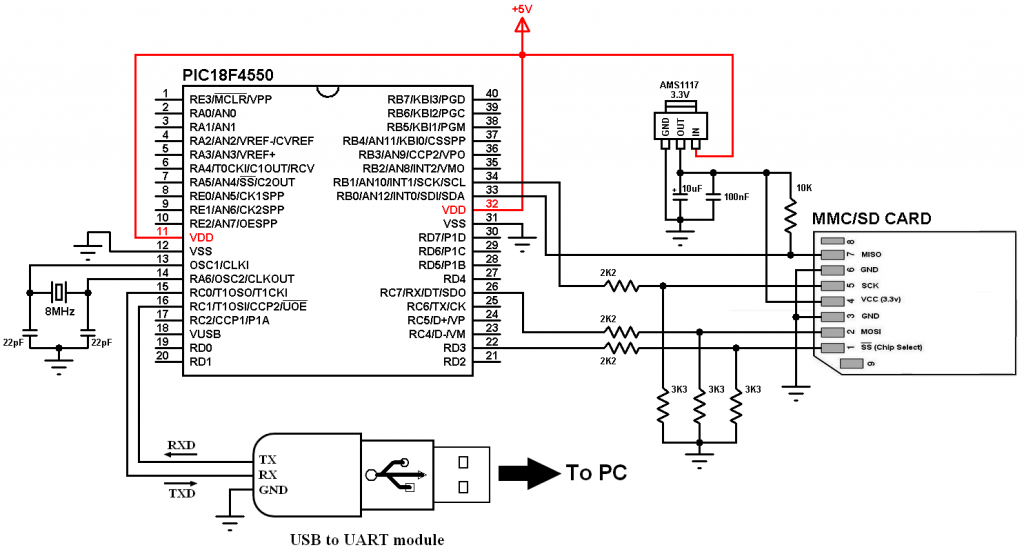 Note that all grounded terminals are connected together.

In both circuits the microcontroller runs with an external crystal oscillator of 8MHz and MCLR pin is configured as a digital input pin (in the software). The SD card is connected to hardware SPI module pins (SCK, MOSI and MISO) and SS pin is connected to RD3.

To connect the microcontroller to the laptop we need a USB to serial UART convert module such as the FT232RL module.
It also can be implemented using MAX232 IC, four 10 uF capacitors and USB to RS232 converter (if the PC doesn’t have COM port).
An example of the FT232RL module is shown below:

As mentioned above, to be able to compile the C code below we need MMC/SD driver and FAT library (mmcsd_m.c and fat_m.c), they can be downloaded from the above link.

The compilation of the project C code may give some warnings, just ignore them!

With the 8MHz and PLL2 the microcontroller becomes working at 48MHZ (12 MIPS) which is the highest speed of the PIC18F4550 and its hardware SPI module.

In this project I tested 2 micro SD cards, the first one is Samsung 8GB SDHC and the second one is Samsung 2GB SDSC, both cards are formatted with FAT32.
The result of my hardware circuit is shown in the image below where the created folder (Test Dir) and text file (log.txt) with its content are shown:

SD Card file is FAT32 image file, it can be downloaded from the link below:
SD Card FAT32 image