This project shows how to simply measure AC current using an Arduino uno board and 50/5 current transformer with Ture RMS calculations.
A 1602 LCD connected to the Arduino board is used to display current values, the Arduino also sends the same values to the Laptop which can be viewed using serial monitor. 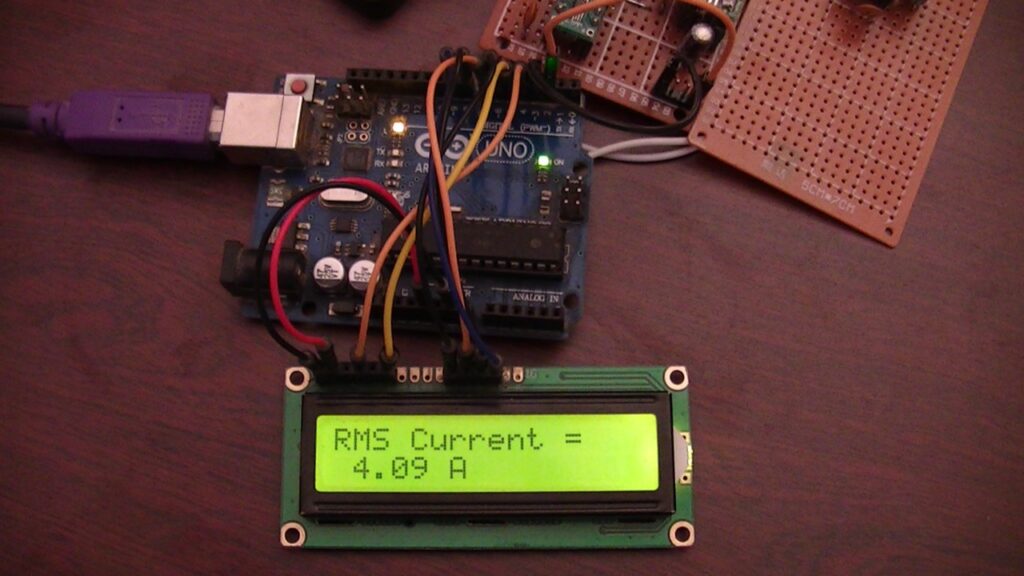 About Current Transformer:
Current transformer (CT) is an instrument transformer which is used to step down current by the inverse of its turns ratio. The secondary of the current transformer has more tuns than the primary. Today, a typical CT secondary rated current is 5A or 1A, however, many CTs have smaller rated secondary current such as 20mA, 40mA …

Usually, the current transformer ratio is stated to include primary and secondary current ratings, for example 600:5, means that a 600A in the primary is converted into 5A in the secondary.
When current is passing through the primary of the CT, the secondary should be always kept shorted either through a shunt resistor (or meter coils) or through a shorting switch (for example jumper) because the secondary may produce very high and harmful potential.

Another thing should be noted with CT is its rated apparent power, for example 10VA, or its maximum burden impedance.

Note that in the circuit there is 1 ground only which is the same as the Arduino ground (GND).
The Arduino uno board is represented by U7.
For circuit resistors, a low tolerance resistors should be used, let’s say 1% or lower, lower tolerance gives better accuracy!

Circuit description:
As shown in project circuit schematic diagram above, the current transformer which is noted as T1 has the following characteristics:
Primary rated current: 50A
Secondary rated current: 5A
Turns ratio: 50/5 = 10
Apparent power: 0.5VA (other CT with higher power can also be used)

The full name of the current transformer which I’m using is: BZCT18AL, it’s the one shown below: 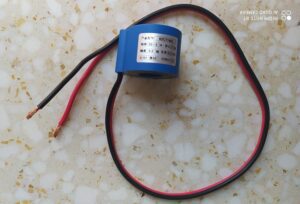 The wire that feeds the load passes through the hole of the current transformer. Note that only 1 wire of a single phase load has to be used to measure the current, the CT will read 0A if the two wires (phase and natural) are used because the sum of the magnetic field produced by the 2 wires is 0!
Other types of current transformers may be used such as 20/5, 75/5, 100/5 … but its ratio needs to be modified in the Arduino code. 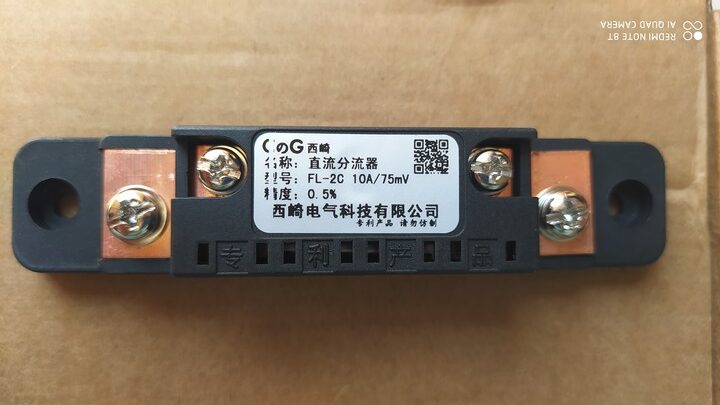 Current carrying capacity of the shunt resistor has to be taken into consideration, rated power also may be used with this formula: P = R x I² , where R is the resistance and I is CT secondary rated current.
Because of very low voltage drop across the shunt resistor, installation method may have a big affect on the overall accuracy of the measurement device, always we should go to the used shunt resistor datasheet to see how to place it on the PCB (Printed Circuit Board).
I used the FL-2C 10A/75mV because it has a good accuracy of 0.5% (as noted), low cost and easy to use for a DIY project.

So, for a 5 Amp (rated CT secondary) passing through the shunt resistor, a voltage drop of 37.5 mV is generated. One terminal of the shunt resistor is connected to circuit ground (GND) and the other one is connected to MCP6V02 auto-zeroed rail-to-rail op amp (U1 in the circuit schematic). I used this type op amps because they have very low voltage offset & drift and input bias current, they are really good choice for this kind of projects when it is related to accuracy.

The second op amp of the MCP6V02 (U1) is used to amplify the voltage signal produced by the voltage follower with variable gain, the type of this amplifier is inverting amplifier.
I used an amplifier circuit in order to amplify the very low voltage signal that the Arduino may not be able to read. The gain of this amplifier is automatically controlled by the Arduino with gains of: 18, 180 and 1800.

Both MCP6V02 (U1) and TS5A23166 (U5) are supplied with dual bipolar power supply with +1.5V and -1.5V. Such supply is required for both ICs because the input is an AC signal, if single supply is used then the negative part of the signal waveform will be ‘killed’!

I used LT1761-SD LDO regulator (U3) from Analog Devices to get approximately +1.5V, the input voltage of this regulator is 5V and it comes from the Arduino board, I chose R13 and R14 (connected to ADJ pin) respectively with values 22k and 100k to get an output of +1.5V (voltage output equation in LT1761 datasheet).

In the other hand, I used LT1964-SD LDO negative regulator (U4) from Analog Devices to get approximately -1.5V, the input voltage of this regulator is -5V. I chose R11 and R12 (connected to ADJ pin) respectively with values 22k and 100k to get an output of -1.5V (voltage output equation in LT1964 datasheet).
However, to get -5V I used B0505S-2W isolated DC/DC converter (U2). The input as well as the output of this small module is 5V, with the input isolated from the output.
By connecting B0505S-2W output positive pin to circuit GND we get -5V on its negative pin (with respect to circuit GND). The negative voltage is then used to feed the LT1964-SD regulator.
The B0505S-2W input supply is from the Arduino board.

Since we are working with alternating current then a part of its waveform is negative. The Arduino ADC module can’t read analog negative voltages and we need to shift all the waveform to the positive side, this means we have to add a dc offset to the AC voltage signal produced by the MCP6V02 (U1) without affecting the gain again.

Before the AC signal goes to Arduino analog channel 0 (A0) it passes through an RC low pass filter which comprised of R21 and C14. The frequency of this filter can be simply calculated with this equation:
f = 1/(2 x π x R x C) = 23.4kHz

I used the MCP1501-20 (U8) to get a precise voltage of 2.048V which is then used as positive voltage reference for the Arduino microcontroller ADC module. The MCP1501-20 is also supplied from the Arduino board with 5V. Its output is filtered and connected to the Arduino AREF pin.

AC Current measurement using Arduino and current transformer code:
Project code is the one below, it was tested with Arduino Uno board.
The code tries to calculate RMS values for symmetrical AC signal applied to analog channel 0. It can measure AC currents only, when a DC current follows through the shunt resistor then the display will show 0.00 A, because at all times the DC (or average) value is deducted from the whole input signal.

The Arduino uno board microcontroller (ATmega328P) contains a 10-bit ADC module, the positive voltage reference is 2.048V means that a 2.048V is digitally represented by 1023 and 0V is represented by 0 (1 digit for every 2mV).

Load current ranges with respect to gain are as follows:

The video below shows my hardware circuit test with some different loads up to about 10 Amps. I hope the video is clear for you and sorry for bad recording:

Note that some wires connecting the Arduino uno and the DIY PCB are soldered on the back of the two boards, this removes small voltages & noise caused by poor connections between jumper wires and Arduino board female header pins. 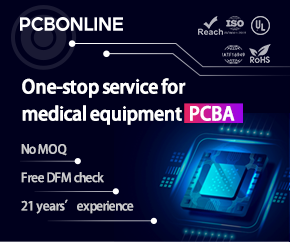