PWM Period:
The PWM period is specified by writing to the PR2 register. The PWM period can be calculated using the following formula:
PWM period = [(PR2) + 1] • 4 • Tosc • (TMR2 Prescale Value)
And the PWM frequency is defined as 1/[PWM period].
For example for PR2 = 250 , microcontroller frequency = 8MHz and Prescale = 16 we get a PWM frequency of 500Hz.
The CCS Timer2 configuration has the following form:
setup_timer_2(mode,  period, postscale);
where: mode is TMR2 Prescale Value, period is PR2 and postscaler is not used in the determination of the PWM frequency (keep it 1).
Previous example gives the following Timer2 configuration command:
setup_timer_2(T2_DIV_BY_16, 250, 1);

PIC18F4550 standard PWM example with CCS C:
This is a simple example shows how to use ECCP (CCP1) and CCP2. Circuit schematic is shown below. 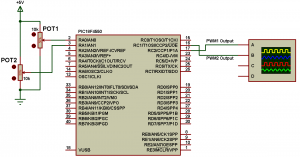 In the above circuit there are 2 potentiometers POT1 and POT2. These pots are used to set PWM1 and PWM2 duty cycles respectively. PWM1 output (RC2) and PWM2 output (RC1) are connected to an oscilloscope channels A and B.
PIC18F4550 microcontroller internal oscillator is used @ 8MHz and MCLR pin function is disabled. 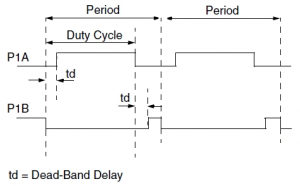 In Half-Bridge Output mode, the programmable dead-band delay can be used to prevent shoot-through current in half-bridge power devices.
In CCS C compiler, to setup the enhanced CCP module as Half-Bridge output mode use the following command:
setup_ccp1(CCP_PWM | CCP_PWM_HALF_BRIDGE);
And to stop the PWM output use the following command:
setup_ccp1(CCP_OFF);

PIC18F4550 EPWM half-bridge mode example:
This example shows how to use the enhanced PWM as half-bridge output mode. Circuit schematic is shown below. 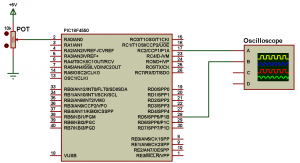 POT is used to change the PWM duty cycle.
PIC18F4550 internal oscillator is used and MCLR pin function is disabled. 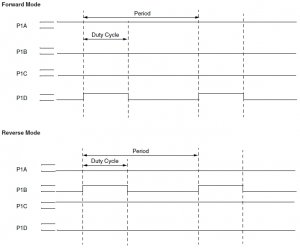 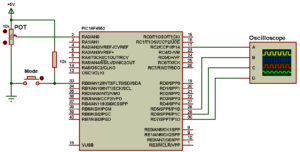 The potentiometer is used to set the PWM duty cycle and the pushbutton to toggle between the forward and reverse modes.