This post shows how to build a half wave controlled rectifier using Arduino uno board and one thyristor (SCR).
No warranty is provided with this project, do it at your own risk!
SCR: Silicon Controlled Rectifier.

The SCR (thyristor) is a three-terminal device (Anode, Cathode and Gate) with four layers of alternating p- and n-type material. The gate terminal is used to control the SCR, the anode (A) and cathode (K) are connected in series with the load. The SCR is just a controlled diode. 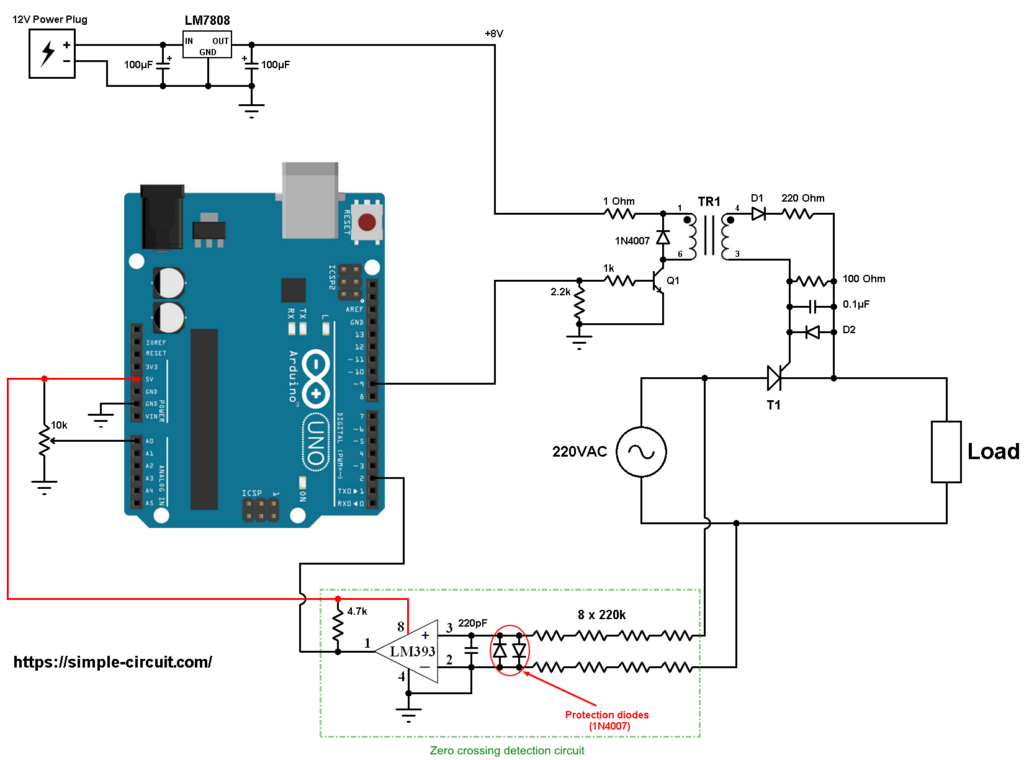 The input voltage of the circuit is 220V/230V 50Hz alternating current (AC) from home outlet. The phase (line) terminal is connected to thyristor T1 anode and the natural is connected directly to the load.
The load can be purely resistive (for example lamp) or inductive (motor).
I’ve used a simple lamp with 40W (purely resistive load).

The cathode of the thyristor is directly connected to the load.
In this project I used TYN1225 thyristor (datasheet).

The diodes D1 and D2 are simple diodes which may be 1N4007 or 1N4148.
The transistor Q1 is an NPN transistor which may be KSC2383 (datasheet) or equivalent. I’m using the KSC2383 in my hardware circuit!
The Q1 transistor base terminal is connected to Arduino pin 9 through 1k ohm resistor.

The firing angle alpha is controlled from the 10k ohm potentiometer (or variable resistor) where its output is connected to Arduino analog pin 0.

The thyristor is fired using a PWM signal (pulse train) which is generated using Timer1 module on pin 9 with frequency of 3.9375 kHz.
The duty cycle is set to 50, so we get a pulse train of 50µs (required by the pulse transformer YHDC KMB472-101):

The following images shows some waveform of the load voltage using source of 220VAC – 50Hz and a simple 40 watts lamp.
The first result is for a firing angle of 0 degree (0 µs): 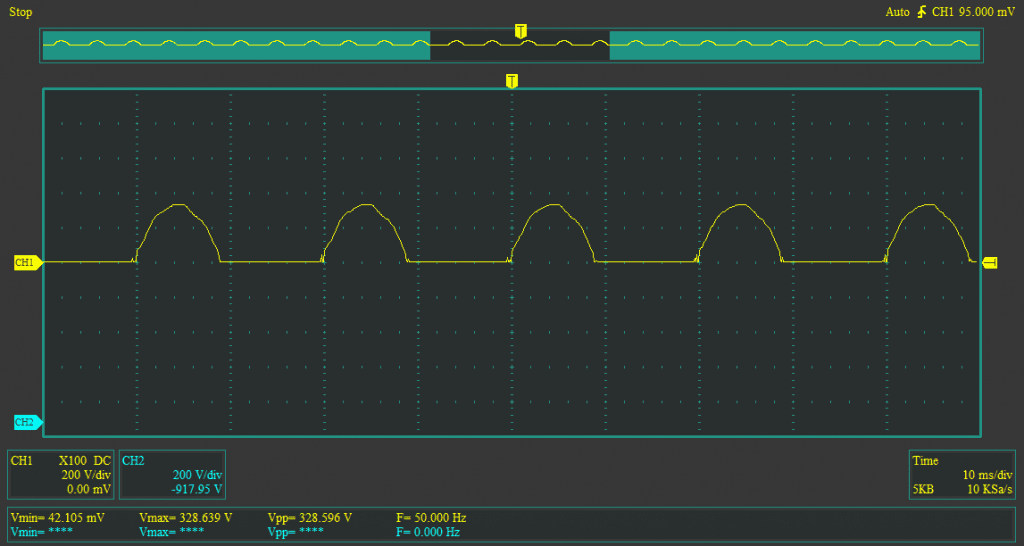 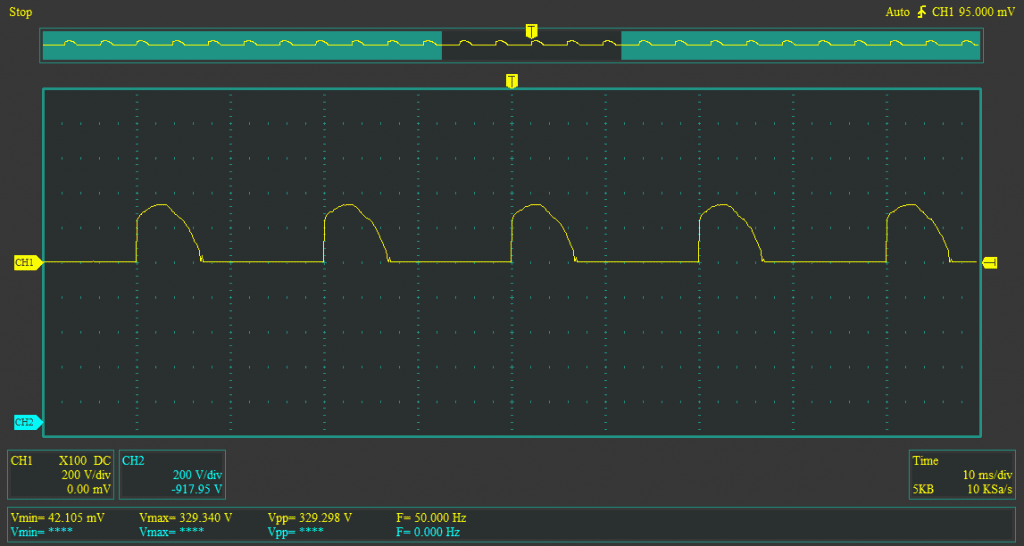 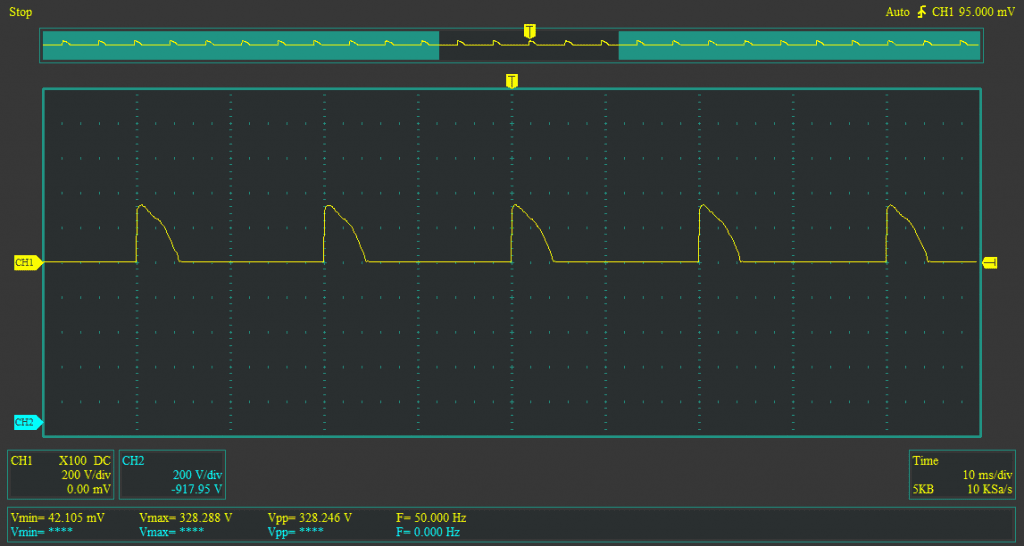 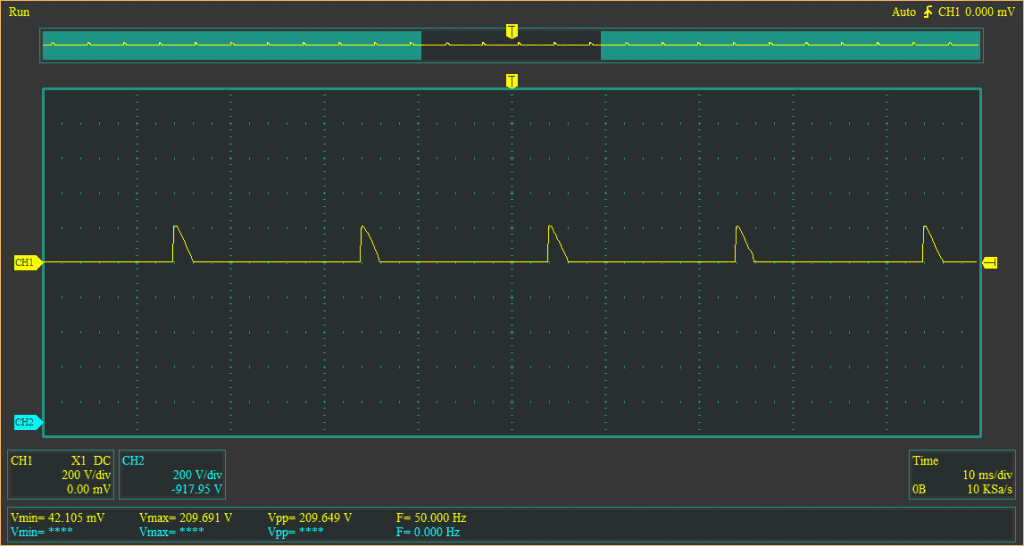