This Arduino project shows how to control DC motor speed using full wave controlled rectifier.
The speed of the DC motor is controlled using a potentiometer (connected to the Arduino board) by varying the value of the firing angle ‘alpha’ of the bridge thyristors.
The bridge rectifier used in this project is an AC to DC converter which consists of two thyristors and two diodes (semi-converter). 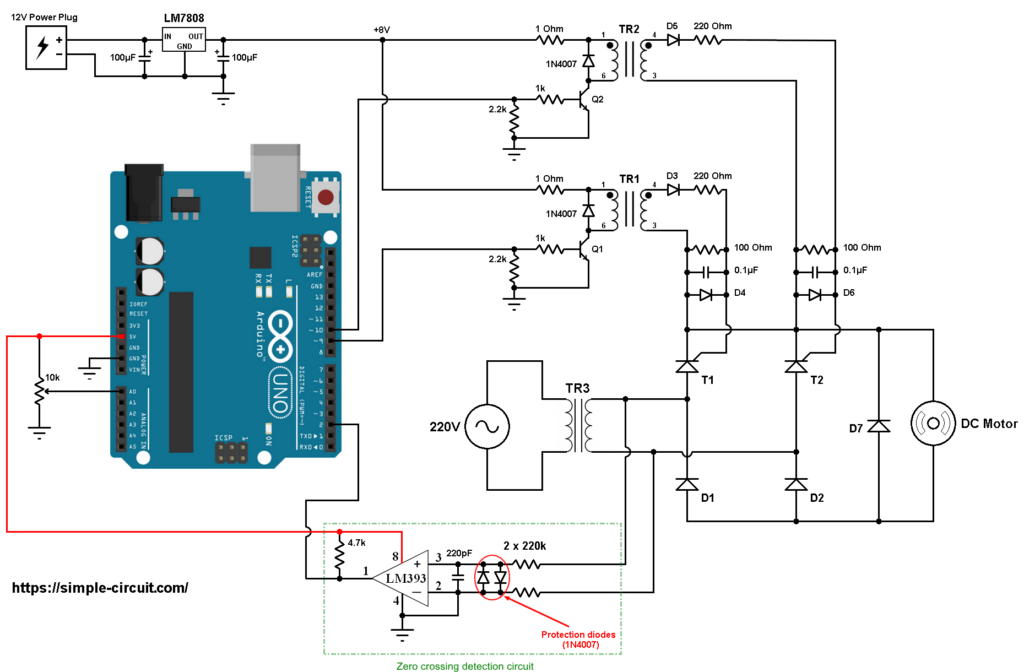 The input voltage of the circuit is 220/230V 50Hz alternating current (AC) from home outlet (single phase).
Transformer TR3 is a step down transformer that reduces the 220V into 12V (rms values) which is the same as DC motor nominal voltage.

In this project I used the LM393 (dual comparator IC) for the zero crossing events detection. The two diodes (1N4007) which are connected between the non-inverting input (+) and the inverting input (-) of the comparator are used to limit the voltage between those pins. The output of the LM393 (or LM339) is an open collector, so I added the 4.7k ohm resistor there (between +5V and arduino pin 2). Also the comparator chip is supplied with +5V that comes from the Arduino board.
The non-inverting ( + ) and inverting ( – ) pins of the comparator are connected to the output of the transformer TR3, each one through 220k ohm resistor.

The video below shows my simple hardware circuit: