At any time, the Grove 4-digit display shows the value of one quantity (temperature or humidity) and the Arduino automatically toggles between them every 10 seconds. A push button (Grove button module) is connected to the Arduino board which is also used for the same purpose. 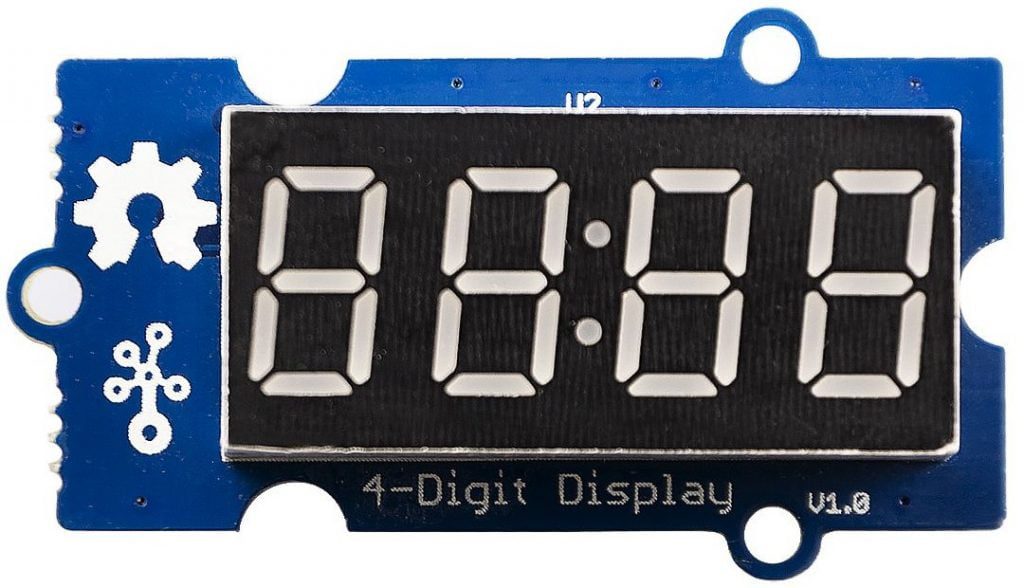 And the following image shows its back:

This display module is connected to Seeed Studio Base Shield via 4-pin Grove cable, the base shield is an add-on board that directly mounted to the Arduino/Genuino uno board.
The 4-pin cable pins are: GND, VCC, DIO (data input/output) and CLK (clock).
The digital pins DIO and CLK control the displayed content and the brightness of the display.

The button module has a pull down resistor of 10k ohm, if the button is pressed the state of SIG (signal) pin will change from low to high.

Arduino with Grove DHT11 sensor 4-digit display circuit:
The following image shows the connection of the 3 modules with the Grove base shield where three 4-pin cables are used for the connection between the Grove modules.
Note that the base shield is directly mounted to the Arduino UNO board.

Seeed Studio provide a library for their Grove DHT11 sensor but I recommend to use the one given by Adafruit Industries which can be installed also through library manager (in the search box write “dht sensor” and choose the one written by Adafruit) or manually, download links are below:
Adafruit DHT library           —>   direct link

After the manually download of the 2 library files, go to Arduino IDE —> Sketch —> Include Library —> Add .ZIP Library … and browse for the .zip file (previously downloaded).
The same thing for the 2nd library file.

In the Arduino code there are 2 libraries which are included as shown below:

Definition of the Grove 4-digit display pins (CLK and DIO) and initialization of its library (TM1637 library):

The resolution of temperature and humidity measurements are respectively is 1°C and 1%.