As mentioned above, the BLDC motor is a 3 phase DC motor which means it has 3 winding on the stator core. Two windings are excited at a time to create a rotating electric field. This method is fairly easy to implement, but to prevent the permanent magnet rotor from getting locked with the stator, the excitation on the stator must be sequenced in a specific manner while knowing the exact position of the rotor magnets. 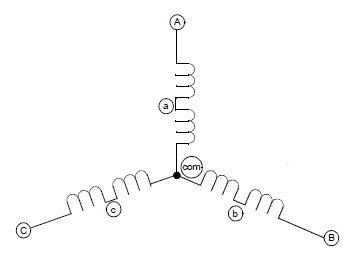 The sensored BLDC motor has 3 hall effect sensors (Sensor A, Sensor B and Sensor C) to sense rotor position, this sensors are placed as shown in the following picture. The motor which I’m going to drive has pinout as shown below (other motors may have another pinout).
In this motor each hall effect sensor has 4 pins: VCC, GND and two outputs (some sensors come with 3 pins: VCC, GND and output). 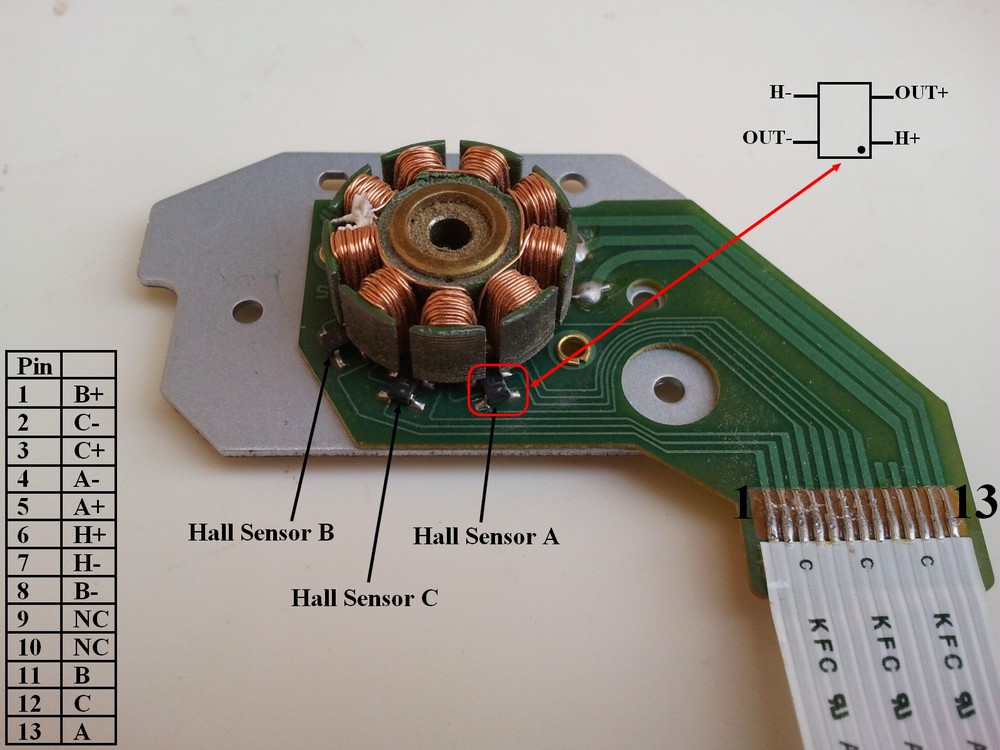 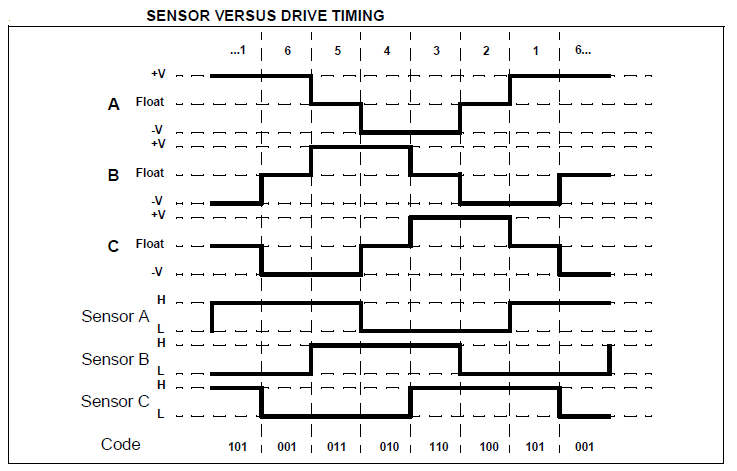 A three phase bridge is used to energize the BLDC motor windings.

According to the hall effect sensors, the 3 phase inverter bridge is controlled as shown in the following table: In the circuit there are 3 comparators A, B and C (LM339) which are used with the hall effect sensors to detect rotor position. The complete circuit of the LM339 is shown below: Also in the circuit there are 8 AND and 3 NOT gates, and for that I used 2 x SN74LS08 (each one contains 4 AND gates) and one SN74LS04. The complete circuit of the three ICs is shown below: The two gates AND1 and AND2 are used to create two PWM signals from single PWM signal because PIC16F887 microcontroller has only two PWM modules and our project needs 3.
The other AND gates (AND3 – 8) and the NOT gates are used to drive the bridge mosfets and also provides a good protection to our mosfets because high and low mosfets of one line must not be ON at the same time.
A 10K ohm potentiometer is used to control the speed of the BLDC motor where its output is connected to AN0.
A 20MHZ crystal oscillator is used and MCLR pin function is disabled.

CD-ROM Sensored brushless DC motor drive with PIC16F887 microcontroller C code:
The following is code is for CCS PIC C compiler.
The potentiometer is used to vary the duty cycle of PWM1 and PWM2 signals which causes the speed of the BLDC motor to change. The outputs are controlled according to the following table:

The two PWM modules of the PIC16F887 are used to generate two PWM signals. Timer2 module is configured so that the each PWM signal has a frequency of 4.88KHz and 10-bit resolution:
setup_timer_2(T2_DIV_BY_4, 255, 1);
The potentiometer is used to change the duty cycle of the PWM signal which causes the speed of the BLDC motor to change.
The complete C code of this project is as the one below:

Finally the following video shows a simple hardware circuit of the project.