This post shows how to control DC motor speed and direction of rotation using PIC16F887 microcontroller and L293D motor driver.
The L293D quadruple half-H drivers chip allows us to drive 2 motors in both directions. With one PWM signal from the PIC16F887 and two control signals we can easily control the speed as well as the direction of rotation of one DC motor. PWM: Pulse Width Modulation.

The compiler used in this project is mikroElektronika mikroC PRO for PIC.

In this project the speed of the DC motor is controlled using a potentiometer connected to the PIC16F887 microcontroller. The speed is related to the variation of the duty cycle of the PWM signal, the DC motor reaches its maximum speed when the duty cycle is equal to 100% (255 for 8-bit resolution).
The direction of rotation is controlled using a pushbutton, if the pushbutton is pressed the motor will change its direction. 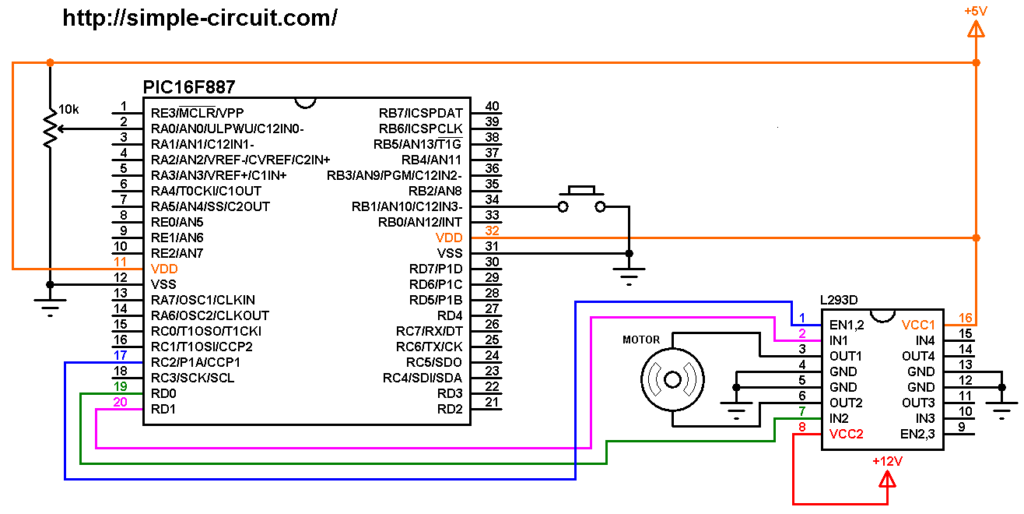 In this project the PIC16F887 microcontroller uses its internal oscillator @ 8 MHz, MCLR pin is configured as an input pin.

DC Motor control with PIC16F887 microcontroller C code:
The following C code is for mikroC PRO for PIC compiler, it was tested with version 7.2.0.

Internal weak pull-up is enabled for pin RB1, the following lines are used for that:

MikroC PRO for PIC compiler has a built-in library for PWM. With this library the resolution of the PWM is 8-bit which means the duty cycle can be between 0 and 255.

In this project I used the ADC digital value to set the PWM signal duty cycle, and to convert a 10-bit number to 8-bit, we’ve shift it (the 10-bit number) to the right by 2 as shown below (motor_speed >> 2):

The following small video shows Proteus simulation of the project:

and this video shows how the project should work in hardware circuit where Arduino UNO board is used instead of the PIC16F887 microcontroller: