Building a data logger using Arduino and SD card is so easy, this topic shows how to build a simple temperature and humidity data logger with DHT11 sensor.

Arduino data logger using SD card and DHT11 sensor circuit:
Arduino datalogger circuit diagrams are shown below, both circuits are well working.
The first circuit consists of three voltage dividers to step down the 5V into 3V, the voltage dividers are for: SS (chip select), MOSI (master in slave out) and SCK (serial clock) signals.

and the second circuit uses micro SD card module, this module is powered with 5V (comes from the Arduino board), it has AMS1117 voltage regulator and a voltage level converter (74LVC125A) which converts the 5V signals into 3.3V for lines: SS, MOSI and SCK: 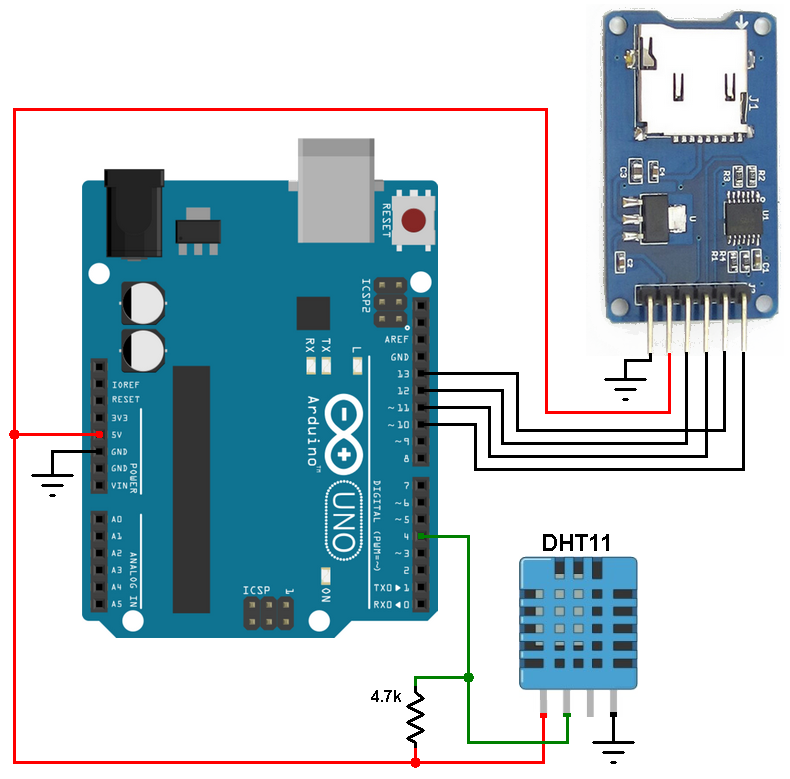 With the micro SD card module the connections are more simpler, the sd card module is supplied with 5V which comes from the Arduino board.
The SD card module has 6 pins which are (from left to right): GND, VCC, MISO, MOSI, SCK and CS (chip select).

Arduino data logger code:
The code below reads temperature and humidity from the DHT11 sensor, then it saves the data into the SD card within a file named DHT11Log.txt and finally it sends the same data serially to PC. The reading and storing of data is done every 1 second.

As a result, I powered my circuit and after few seconds I turned it OFF, I removed my 2 GB FAT16 SD card from the circuit and placed it in the PC, I opened my SD card with windows and I got the file shown below:

Arduino IDE serial monitor gave me the window shown below: 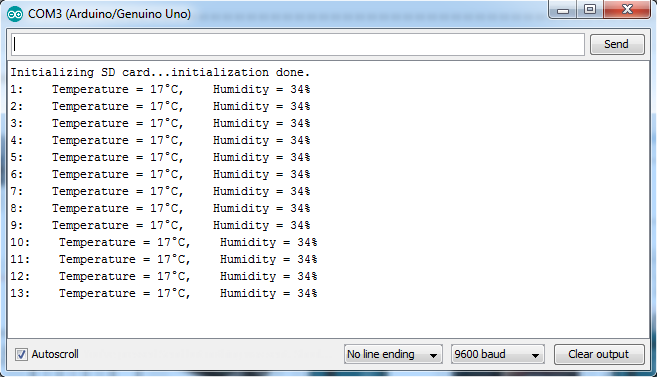 The video below shows a simulation of the Arduino datalogger using Proteus, I got the same result as the real hardware circuit:

Downloads:
Adafruit library for DHT series (after extracting put the folder named DHT in the library folder of Arduino):
Download