This small post shows how to make a temperature measurement station using PIC18F46K22 microcontroller and LM35 analog temperature sensor where temperature value is displayed on a three-digit common anode seven-segment display.
CCS C Compiler is used in this project

The LM35 temperature sensor is a three pin device (VCC, OUT and GND) with an output voltage linearly related to Centigrade temperature. Since the LM35 output varies with dependent to the temperature, we need an ADC (Analog-to-Digital Converter) module to measure this voltage. The PIC18F46K22 microcontroller has one ADC module with 10-bit resolution. 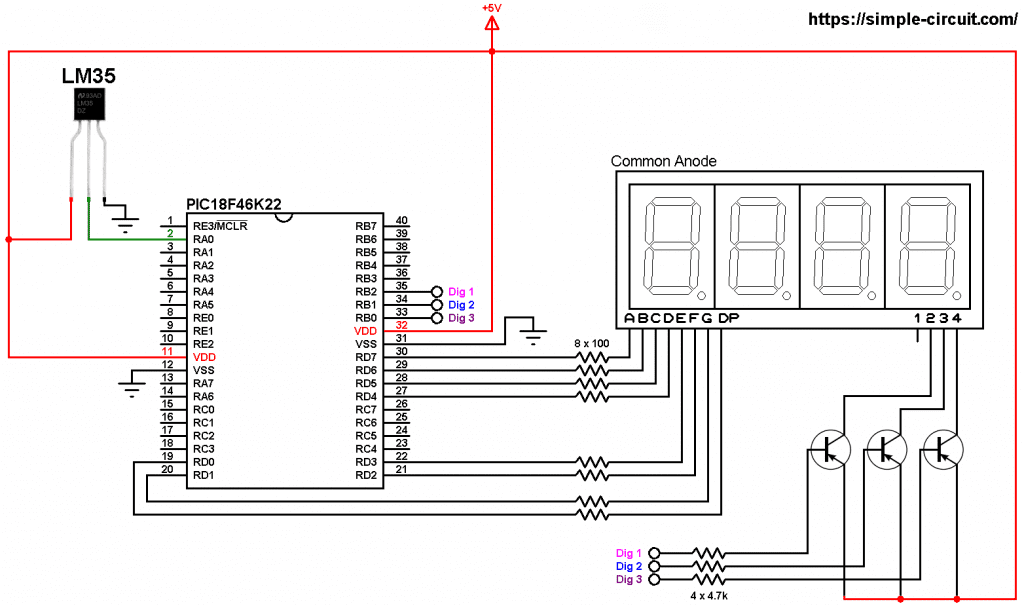 The output pin of the LM35 sensor is connected to pin RA0 which is analog channel 0 (AN0).

The 3 transistors are of the same type (PNP).

In this project the PIC18F46K22 microcontroller runs with its internal oscillator @ 8 MHz, MCLR pin is configured as an input pin.

The internal fixed voltage reference (FVR) of the PIC18F46K22 microcontroller is set to 1.024V using the following line:

The ADC module is configured so that it uses its internal clock, voltage references (negative and positive) are set to VSS and FVR respectively where the FVR is the one previously set to 1.024V.
The LM35 output pin is connected to AN0 channel. All these configurations are done in the code as shown below:

PIC18F46K22 ADC module is used with 10-bit resolution which means the digital value of the input analog voltage varies between 0 (for 0V) and 1023 (for 1.024V). The digital value also represents the temperature in tenths °Celsius (output value of “274” equals 27.4 °Celsius).